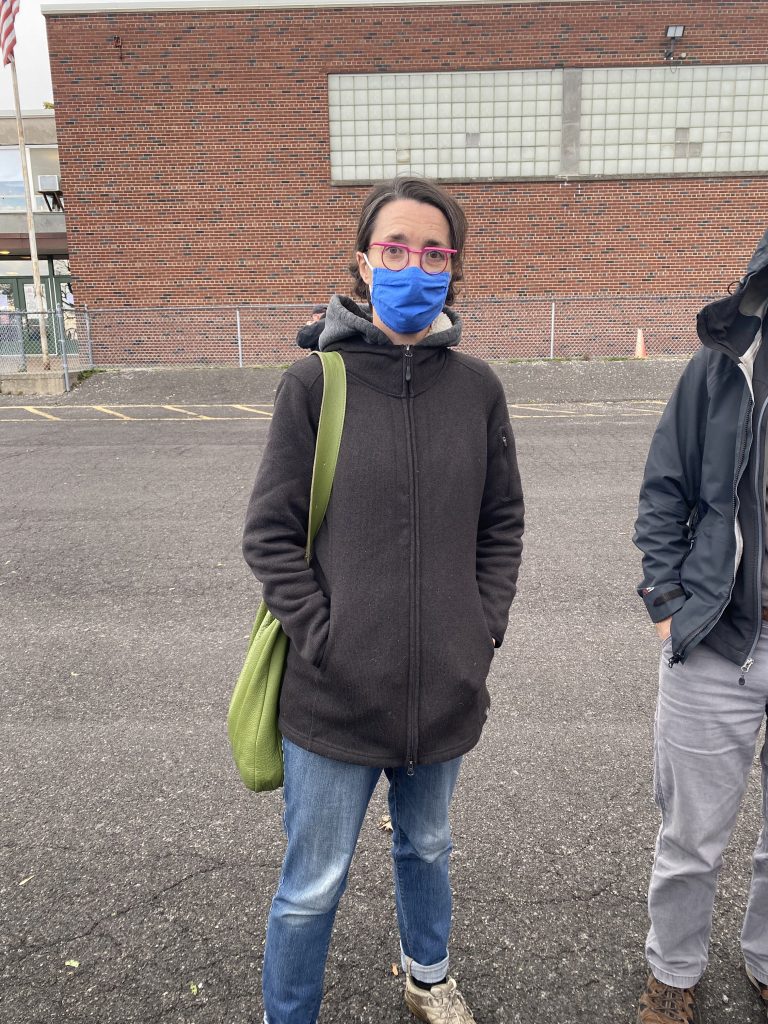 Syracuse resident Heather Brubaker decided to vote in person at the Hillside Work Scholarship Connection Gym to show her children how to cast a ballot and highlight the importance of using your right to vote. (c) 2021 Zachary Goldman

Zachary Goldman · Democracy In Action - Voters Return To Polls For 2021 Election
Voters in Syracuse explain why they decided to vote in person for the 2021 election.

Zach Goldman: AT THE HILLSIDE WORK-SCHOLARSHIP CONNECTION GYM IN SYRACUSE TODAY, VOTERS RETURNED IN PERSON TO VOTE ON ELECTION DAY. DUE TO COVID-19 LAST YEAR, ACCORDING TO THE ONONDAGA COUNTY BOARD OF ELECTIONS, ALMOST 52-THOUSAND ABSENTEE BALLOTS WERE FILED DURING THE 2020 PRESIDENTIAL ELECTION. THIS YEAR, MANY ARE GOING BACK TO THE POLLS. SYRACUSE RESIDENT WALLACE BARKIN SENIOR SAYS VOTING LOCATIONS PLAY INTO PEOPLES DECISION TO VOTE IN PERSON.

Wallace Barkin Sr.: I think it’s according to the person and where they live.

Zach Goldman: FOR OTHERS, VOTING IN PERSON PROVIDES LEARNING OPPORTUNITIES FOR CHILDREN. SYRACUSE PARENT HEATHER BRUBAKER SAYS THAT GOING IN PERSON GAVE HER THE CHANCE TO SHOW HER KIDS THE ROPES OF VOTING.

Heather Brubaker: I mean we like the experience of bringing the kids to the polling places and just showing them the process and talk them through it

Zach Goldman: BRUBAKER SAYS THE ABILITY TO BRING HER CHILDREN WITH HER TO VOTE PUSHED HER TO GO IN PERSON.

SYRACUSE, N.Y. (DIA) – Voters are returning to the polls in person to cast their votes one year after some Onondaga County residents opted to vote via absentee ballots in the 2020 Presidential Election. Today, voters at the Hillside Work-Scholarship Connection Gym for Election Day cast their votes for Syracuse mayor, Onondaga County legislators, along with multiple New York propositions.

This year, there was a drastic decrease, as approximately 5,300 absentee ballots were sent in for the election as of 10 a.m. on Election Day, according to Syracuse.com. Many decided to return to polling locations despite the fact that COVID-19 still lingers among the Syracuse community.

Those who decided to go to the polls this year had different reasons why they chose to cast their ballots in person. Retired pharmacy technician and Syracuse native, Wallace Barkin, Sr., votes in person for every election, including last year’s presidential race. Barkin, who lives near the Hillside location, said many voters, including himself, decide to vote in person because of the poll’s proximity to their homes.

“I think it’s according to the person and where they live and their age,” Barkin said. “It’s very easy, I can get here in three minutes.”

Barkin was one of many who drove to the gym location to cast their vote on paper ballots. Multiple stations were set up inside where voters filled out their ballots.

Heather Brubaker, a dietician and mother of two, also voted in person at Hillside. Brubaker, accompanied by her husband, brought her two young children to the polls. Although her children are ineligible to vote, Brubaker said she wanted Election Day to serve as a learning experience for her kids.

“We like the experience of bringing the kids to the polling places and just showing them the process and talk them through it,” Brubaker said.

Brubaker and her husband voted using absentee ballots during the 2020 Presidential Election. Brubaker said the opportunity to educate her children played into her final decision to vote in person this time around.

Votes will continue to pour in throughout Election Day. You can find out who won at the Onondaga County Board of Elections website under results.