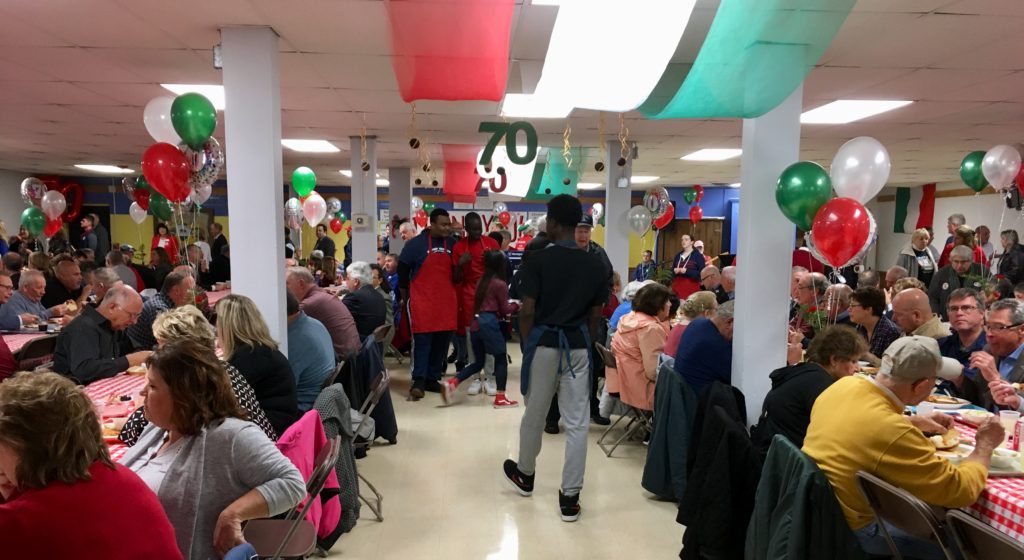 “Over a pot of spaghetti, differences don’t seem to matter,” Caruso said.

The church is hosting its 70th annual Election Day Spaghetti Supper at the Our Lady of Pompei School on North McBride Street. Doors opened at 11:30 a.m., and the event is set to wrap up at 7 p.m.

The church is selling dine-in, take-out and delivery meals for $10 each. Pasta dinners include spaghetti and meatballs, salad and dessert. Customers can order by calling (315) 422-8548 anytime before 7 p.m.

By noon, the buffet line wrapped around the cafeteria. Live music crooned by the raffle booth as people embraced, some wishing candidates good luck.

Around lunchtime, Common Councilor Joe Driscoll and Julie Cerio, candidate for state Supreme Court justice in the Fifth Judicial District, were among the dozens of community members in attendance. Cerio’s family wore blue campaign shirts and the youngest supporter donned blue ribbons in her hair.

“It’s just a lot of great food, great traditions and beautiful people here,” said Lucy Paris, who’s been with the church for 32 years. Preparation kicks into high-gear the few weeks before Election Day, but Paris said the event is on their minds for the entire year.

Dozens of volunteers of all ages assisted with the dinner. Some church members sold meal vouchers, while others worked in the kitchen.

Liz Morgan, who said she was born into the parish, was stationed outside the cafeteria. She sat at a gingham-dressed table, greeting customers before they picked up take-out dinners. Sister Helen Charlebois helped prep the take-out packages beforehand. Today’s she’s helping to sell raffle tickets.

People from all over the county come to this event, Charlebois said. She’s been with this church for nine years and said the dinner is always a great way to bring the community together.

Caruso is glad the rainy weather didn’t put a damper on today’s dinner, and said the attendance has been consistent each year. To him, the spaghetti dinner is about more than good food and a celebration of local democracy.

“It’s a great sign of the longevity, not just of the event, but of the community here and of the church in general,” he said.