ANTHONY BIBBS: I WANT BETTER FOR THIS CITY AND IF MY VOTE MAKES A DIFFERENCE THAN I AM VERY HAPPY”)

THOMAS COOK: ANTHONY BIBBS IS A LOCAL VOTER. HE’S CASTING HIS VOTE TODAY BECAUSE HE WANTS LOWER CRIME RATES IN THE SRYACUSE COMMUNITY.BIBBS:A LOT TIMES I THINK SOME OF THE POLITICANS THEY COME IN DO THEIR JOBS AND THEN THEY GO BACK OUT TO THE SUBURBS OR WHEREVER THEY’RE GOING AND THEY REALLY DON’T GET A FIRST HAND LOOK AT ALL THE STUFF THAT HAPPENS.COOK: HE SAYS VOTING IS THE WAY TO MAKE CHANGE IN THE COMMUNITY AND GOES BEYOND JUST COMPLAINING.

BIBBS: IF YOU GET OUT AND VOTE THEN ITS FOR THE BETTER AT LEAST YOYU IF YOU DID LOSE YOU DID MAKE YOUR EFFORT TO MAKE A CHANGE. AND MAYBE NEXT YEAR IT WILL CHANGE.

COOK: WHILE BIBBS CHOOSES TO VOTE AT THE POLLS EACH YEAR… POLL SITE MANAGER JOHN HOHL-SCHAMBO SAYS THE EARLY VOTING DAYS IN ONONDAGA COUNTY HAS DECREASED THE AMOUNT OF PEOPLE AT THE POLLS ON ELECTION DAYS. JOHN HOHL-SCHAMBO: IF WE SAY ONE OF YOUR BUBBLES WAS INCORRECTLY FILLED OUT WOULD YOU LIKE TO RE-ISSUE YOUR BALLOT A LOT OF THEM WILL JUST SAY NO JUST CAST IT ANWAYS.”)

COOK: HOHL-SCHAMBO SAYS THAT’S BEACUSE PEOPLE USALLY ARE OFF TO WORK OR ANOTHER COMMITMENT AND DON’T HAVE TIME TO COME BACK TO THE POLLS.

WITH LESS PEOPLE AT THE POLLS, HIS JOB THOUGH DOESN’T REALLY CHAANGE.

HOHL-SCHAMBO : FOR ME PERSONALLY MY STRESS IS PRETTY CONSISTENT, SO IT DOESN’T REALLY AFFECT ME BUT IT DOES AFFECT THE VOTERS THEMSELVES WHEN THEY ARE SITTING IN LINE. 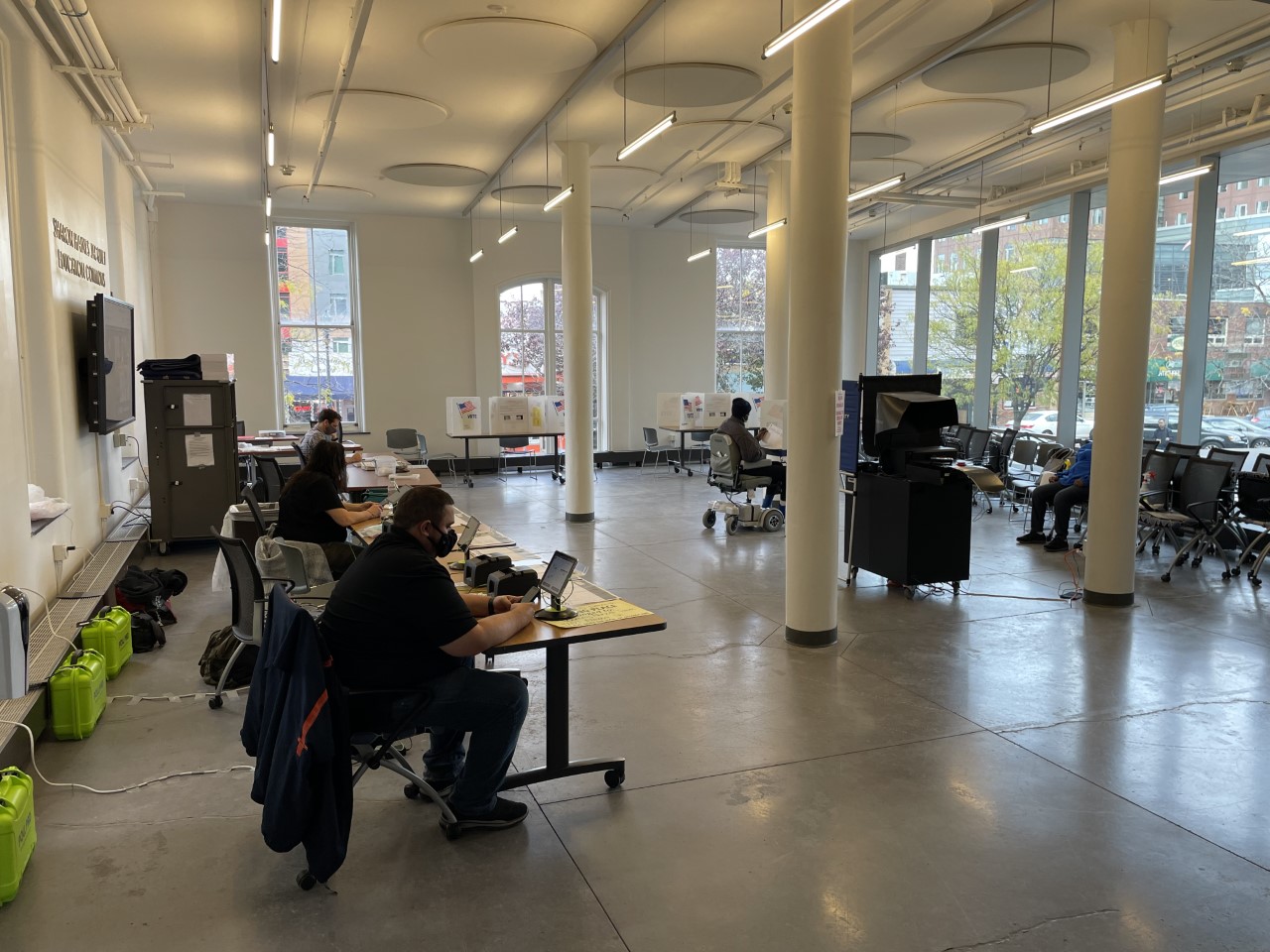 SYRACUSE, N.Y. (DiA) — Turnout is expected to be lower this year because it’s not a presidential or gubernatorial election year. One of the biggest items on the ballot is the City of Syracuse mayor. This afternoon at the Syracuse University Huntington Hall located on Marshall Street the lines were short. The education center at Syracuse University was one of many polling locations near the campus.

“I want better for this city and if my vote makes a difference than I am very happy,” Biss said. “If you get out and vote then it’s for the better at least if you lose you made an effort to make change and maybe next year it will change.”

Polling site Manager John Hohl-Schambo said he is not surprised by the short lines because of the expansion of early voting in Onondaga County. He said it helps voters not be stressed out while waiting in lines.

“It does affect the voters themselves when they are sitting in line,” Hohl-Schambo said.

Polls will remain open until 9 p.m.