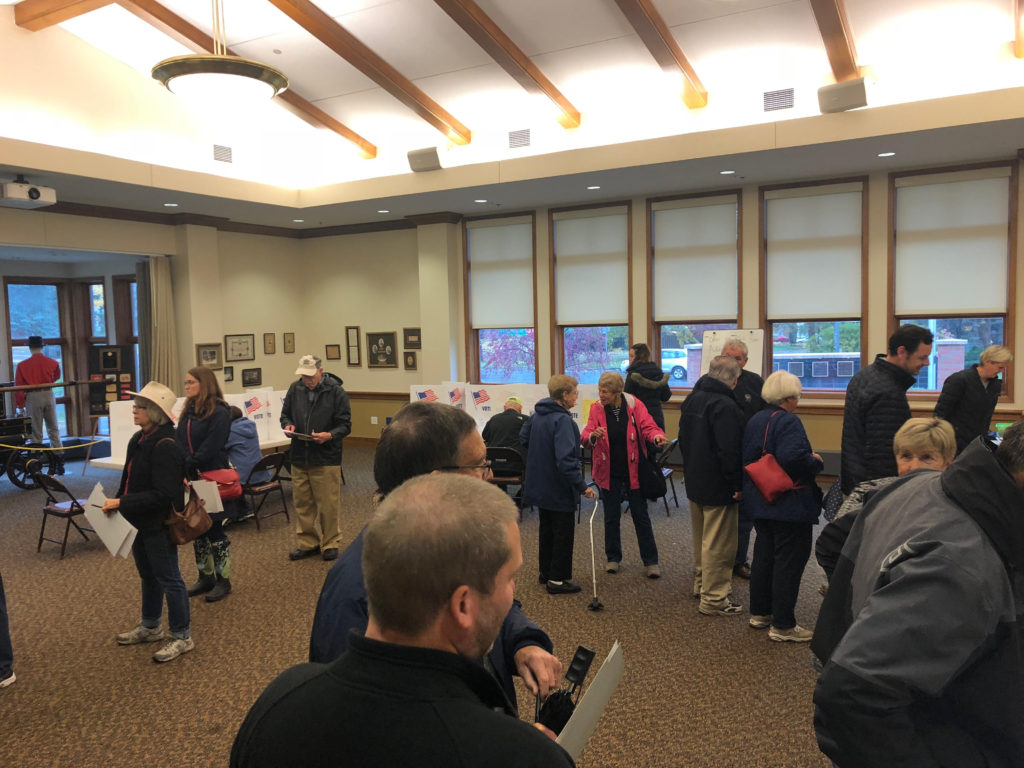 Voters line up at their polling place in Skaneateles, waiting to cast their ballots. © 2018 Tyler Lowell

Skaneateles, N.Y – Morning estimates by voting system specialists at the Skaneateles Fire Hall 77 suggest voter turnout will be higher than previous election cycles, despite the heavy rain moving through the area.

“I’d say it’s been busier than normal,” said Brad McLennan, election inspector for the NY-24 district. “We’ve always had voters here and all of the stations have been filled more than they haven’t been filled,” McLennan explained, noting that while it may be too early in the day to assess the impact of the bad weather, local voters don’t seem to be deterred.

Enthusiasm among women appears to be particularly high.

Linda Balducci, 69, clad in American flag patterned leggings, said that while today was not her first time at the polls it was a very special voting experience nonetheless.

“I have to admit that I’ve never voted in an election before,” Balducci confessed. “It just never seemed important, but this one is crucial,” she said.

Balducci explained that she voted for NY-24 Democratic challenger Dana Balter despite not knowing much about her platform. Balter’s status as a woman Democrat was enough to earn her support.

Balducci cited her gender as one of the major motivating factors behind her decision to cast a midterm ballot. For Balducci, participating in elections is the best way to voice her opinion and show her dissatisfaction what she perceives to be the negative direction of the country.

“As somebody who’s looking out for the next generation and their kids, it’s essential we’re out here,” Balducci said.

Young mom, Deanna Delmonico, 34, and her one-year-old daughter Amelia were among the other women in Skaneateles’ fire hall exercising their civic duty. Delmonico said that she “sadly” hasn’t always been a consistent voter, but the changes she’s perceived since the 2016 elections inspired her to take an interest for the sake of her daughter’s future.

“It’s good to bring [children] and show them what’s going on,” Delmonico said of her decision to bring her young daughter to the polls. She said she hopes it will instill an early passion for participating in the process.

At best, Delmonico said she is holding out hope for a “blue wave” later this afternoon. At minimum, she said she hopes the conclusion of this election will help soothe some of the political tensions that have become par for the course in our everyday lives.

“It seems like everyone is very tense, extremely passionate, but not everyone is on the same side.”