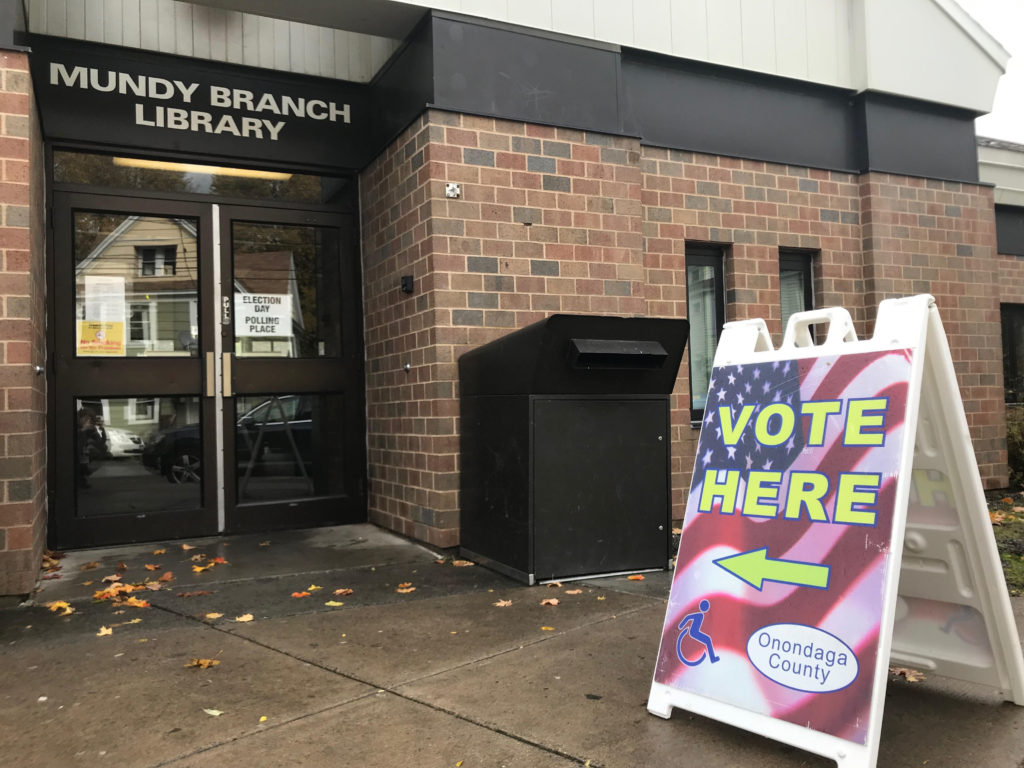 Many parents say that showing their children good citizenship motivates them to go out and vote.

HARTY: Polling places in Syracuse are experiencing a surge in voters on this election day. And while there are a variety of reasons people cast their ballot, many parents are motivated by the want to set a positive example.

Marjorie Graham says she brings her youngest son along every time she votes because she wants him to appreciate his right as an American.

GRAHAM: A lot of people die during elections or they don’t even have a choice. And in America we still have that choice. And I want him to exercise that as an American and understand how important that is.

HARTY: Darren McMullen has taken a similar approach. He says he tries to set an example for his kids by staying politically engaged.

MCMULLEN: I’m raising three kids on my own, single dad. I just try to give my kids the positive way of learning and focusing and paying attention,to just do the right things in life you know.

HARTY: Make sure to get out to the polls because voting ends tonight at 9 o’clock.
Dan Harty, N-C-C News.

For many Americans, voting is a right that is taken for granted. Some may even look at it as a hassle. In a time where people’s lives cease to pause, having to wake up early or make a detour after work to go stand in line and vote is something that can be met with a groan.

Graham, however, always embraces her role as a citizen.

As she submitted her ballot this afternoon, Graham had a distinct smile on her face. That happiness stems from the pride she feels whenever she fulfills her civic duty. Graham, who is originally from Jamaica, pursued her American citizenship after the birth of her youngest son. Every time she goes to the polls, she reflects back on her first time voting.

“I was very proud,” Graham said. “The first time I went to vote, I took my son. I was proud to say that, ‘Now I’m an American, and I have a right to vote in the country that I live in.’ To this day, I take him every single time I can.”

Graham, who is an advanced nurse at a local nursing home, wants her son to appreciate his rights and freedom as an American.

On Tuesday, many of the voters at Mundy Branch Library shared Graham’s sentiment. Whether they had their children with them or not, parents insisted that setting a positive example served as extra motivation to get out to the polls.

Driver for Suburban Taxi Darren McMullen is raising three kids on his own. Along with putting his children into a local charter school, McMullen votes to encourage his kids to be informed, educated citizens.

“I try to [show] my kids the positive way of learning, focusing, and paying attention,” McMullen said.

He thinks all other young people should be informed as well.

“What’s going on around the world, in Congress, in the White House…it’s very important for [young people] to stay educated and motivated,” McMullen said.

Amber Mutschler was another parent at the library Tuesday. The stay-at-home mom had her young son by her side while she casted her ballot.

“He didn’t have school today,” Mutschler said. “It’s a combination of that and bringing him to show him the ins and outs of voting.”