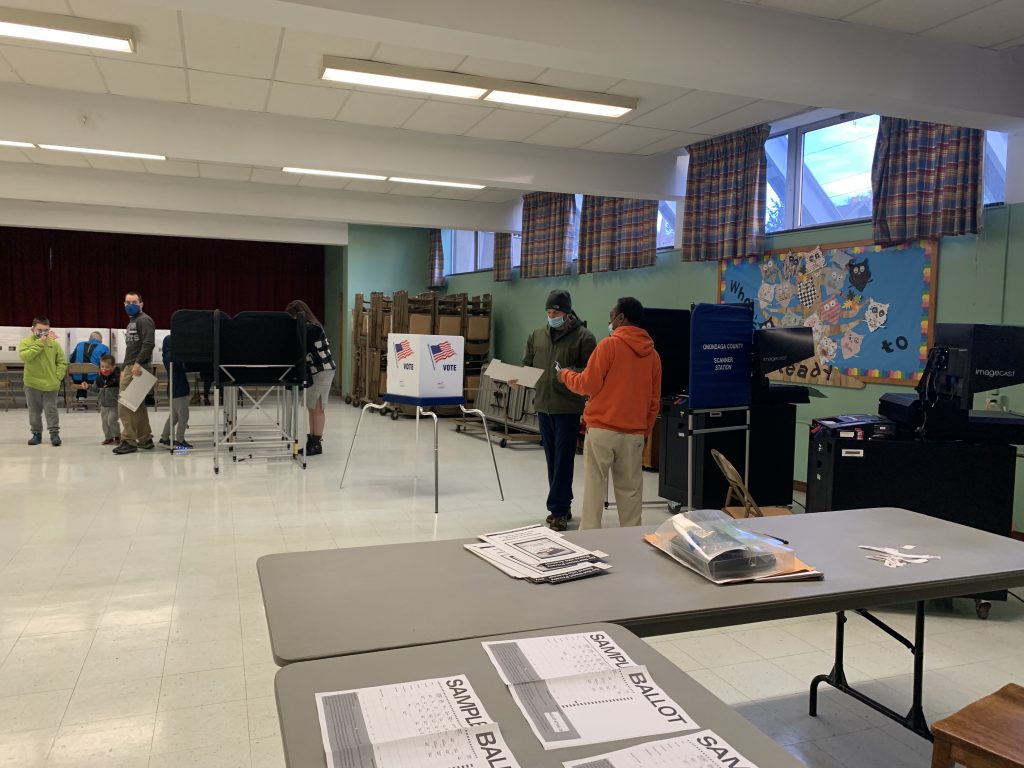 It’s election day, and voters at the Bellevue Heights Methodist Church polling site are coming in with pretty strong opinions.

Linda Abear has her two grandchildren with her to teach them about voting.

The biggest issue is education and…and what they’re teaching in our schools to my grandchildren, and I wanted to teach my grandaughters the process. I think they’re trying to indoctrinate the next generation. Leave the ideology up to their parents.

Whereas Linda takes issue with the educational side of politics, Cjala Surrat has concerns of poverty in Syracuse.

We have some major issues with generational poverty here, and we are at a pivotal time, you know, with the conversation around I-81 and what’s going to happen with that population, so I want to make sure that the person we put in leadership are thinking about those communities that have been generally disenfranchised, and making sure that they have a voice as well. So I am showing up here to support and make sure that we move forward in a way that is beneficial to everybody.

Polls will close at 9 P-M tonight. This is Sammy Lindell reporting for Democracy in Action.

SYRACUSE, N.Y. (DiA) – Syracuse residents have been racing to the polls to cast their votes on Election Day. The Bellevue Heights Methodist Church polling site attracted voters with varying opinions on the issues Syracuse is facing from education within the school district to poverty.

Linda Abear, a grandmother of two girls, said that she brought her grandkids to the polls to teach them how to vote. She felt that it was necessary to do so, especially since they have the day off from school. Abear also had opinions on how the Syracuse City School District is choosing to educate her grandchildren. She said that she feels teachers are “indoctrinating” her grandchildren and this generation. “Leave the ideology up to their parents,” Abear said. She also said that schools should be teaching subjects like math, English and science, without having teachers insert their opinions.

Cjala Surrat’s concerns are more about the generational poverty in Syracuse.

“I want to make sure that the person we put in leadership is thinking about those communities that have been generally disenfranchised,” Surrat said.

She also said that Syracuse is in a critical time, especially with the current I-81 project. She wants to make sure the community moves forward in a way that is beneficial to everybody, and that is why she showed up to vote.

The polls are closing at 9 o’clock tonight, so there is still time to vote across many locations in Onondaga County.