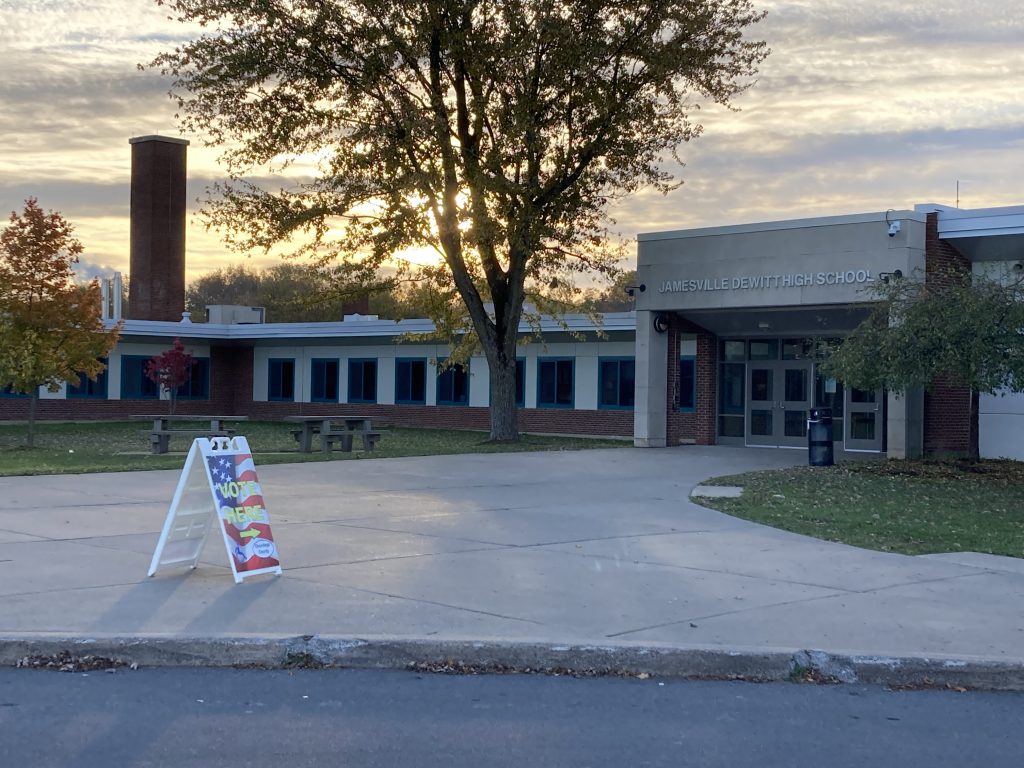 Jamesville-DeWitt High School is home to one of many polling places in Onondaga County, where people are ready to cast their votes. (c) 2021 Yale Kolin

REPORTER: It’s Election Day here in Onondaga County. People are going to the polls today to cast their votes, and it’s the tireless efforts of the poll workers that make it all possible. One poll manager, Anthony Saraceno (sera-SEE-no), who is working today at the polling place at Jamesville-DeWitt High School, says he is working the polls because of his commitment to the American system and to his work.

SARACENO: “I believe in democracy and I believe there should be people here that know how to do it properly.”

REPORTER: Even though working the polls is important to the voting process, it does not come without its share of frustration, which Saraceno has experienced firsthand.

SARACENO: “Today was a little confusing because they moved the polling place on us, like, last night, so we went to the wrong polling place…we couldn’t get in.”

REPORTER: But things are going smoothly now, and the polling place will stay open until closing time at nine o’clock p-m. This is Yale Kolin, reporting for Democracy in Action.

DEWITT, N.Y. (DiA) – It’s Election Day in Onondaga County.  Today, residents from all over the county head to the polls to cast their votes and elect new government at the municipal level and at the county level.

However, the orderliness of the voting process would simply not be possible to attain without the hard work of the poll workers – people who share a common commitment to help voters complete the process as smoothly as possible.  These people work long shifts to make sure that every vote is counted, and every voice heard.

One such person is Anthony Saraceno, who is a poll manager at the polling place at Jamesville-DeWitt High School in DeWitt.  Saraceno says that he is working the polls today because he feels within him a commitment to the American system and to his work as a poll manager.

“I believe in democracy and I believe there should be people here that know how to do it properly,” Saraceno says.

Even though the job of the poll workers is to make the voting process as smooth as possible for the voters, things sometimes go wrong, thus impeding them from doing their job properly.  Saraceno and his fellow poll workers at the Jamesville-DeWitt High School location experienced such an obstacle this morning.

“Today was a little confusing because they moved the polling place on us, like, last night,” Saraceno says.  “So we went to the wrong polling place…we couldn’t get in.”

As of now, however, things are running smoothly at Jamesville-DeWitt High School.  People are filing in with no problems at all, casting their votes and making their voices heard before the polls close tonight.