Local voters are taking the fate of their country into heir own hands by voting in record numbers during the 2018 midterm elections. Video produced by (c) Daniel Booth.

ANCHOR: The 2018 midterm elections are in full-effect, and voters from all over Onondaga County are making their way to polling locations to be a part of the democratic process. N-C-C’s Daniel Booth is live from a local library to update us on the increase in voter turnout.

Daniel Booth: Voters have been flying in and out of the Fayetteville Free Library all day. This year, the library has seen a 20% increase in voters. Earlier this evening, I had the chance to speak with a concern citizen who explain why she thinks it’s more important to vote now, than ever before.

Betty Jones: “Democracy is having a real test this year and that it’s time for us to stand up for it, and if we don’t, we might lose our chances to do so in the future.”

Daniel Booth: With numerous Congressional and governing seats up for grabs, this year’s midterm elections will have a major impact on the political landscape moving forward. This creates a sense of urgency for people to vote, at not only in presidential elections, but local elections as well.

Daniel Booth: The 2016 presidential election changed a lot in this country. And the events that have taken place over the past couple of years have inspired record-breaking voter turnouts all over the country, including Onondaga County. Supporters of both Hillary Clinton and Donald Trump are out at the ballot boxes, making their voices heard.

Daniel Booth: Voters came out to the polls because of current events, to support education, their religious beliefs, or to fight for their economic status. Poll managers have been busy all day with the record breaking turnouts.

Betty Jones: “The whole political process is important, and for it to function properly, we need to all be there.”

Daniel Booth: 80% of registered voters in this Fayetteville voting district came out to vote, which is a lot more than recent years. Daniel Booth, N-C-C News.

ANCHOR: With the 2018 midterm elections heating up, we”ll have more updates and the results later on N-C-C News. 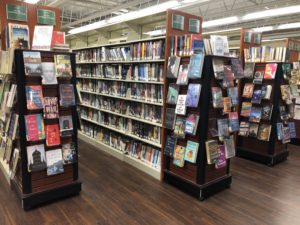 The Fayetteville Free Library is a quiet and easily accessible location for local residents to vote during the 2018 midterm elections. (c) 2018 Daniel Booth

With voter turnout expected to reach record highs, Central New Yorker’s made sure their voices were heard on election day. Political events over the last couple of years woke up a sleeping giant, and inspired millions of people to participate in the 2018 midterm elections. In exciting fashion, the Fayetteville Free Library saw a 20-percent increase in voter turnout this year.

Local residents took it upon themselves to get involved for a multitude of reasons. Recent decisions made by the current presidential administration, support of education, preservation of economic status, and religious beliefs were some of the many factors motivating people to get out to vote. Retiree and Fayetteville resident Betty Jones believes this midterm election could have a more significant on the future of the United States than any other in recent memory.

“Democracy is having a real test this year and that it’s time for us to stand up for it, and if we don’t, we might lose our chances to do so in the future”, Jones said.

Most people on concern themselves with voting in the presidential election every four years. In hopes of having an impact on a local level, my voters have taken their destiny into their own hands by voting, as well as spreading knowledge to inspire others to vote.

The current political climate forces citizens to digest an unhealthy amount of controversy, day in and day out. It’s not easy to stay up to date with all that’s going on in Washington, but the increase in voter turnout proves that people are watching closely. Politicians are being held to a higher standard at both the national and local levels. More than 80-percent of registered voters in the Fayetteville Free Library distract assumed their democratic responsibility and voted. Local residents are standing up for what they believe in, and are demanding change.

“The whole political process is important, and for it to function properly, we need to all be there”, Jones said.

The 2018 midterm election had a historic voter representation, and it could lead to a more educated and well informed society moving forward.