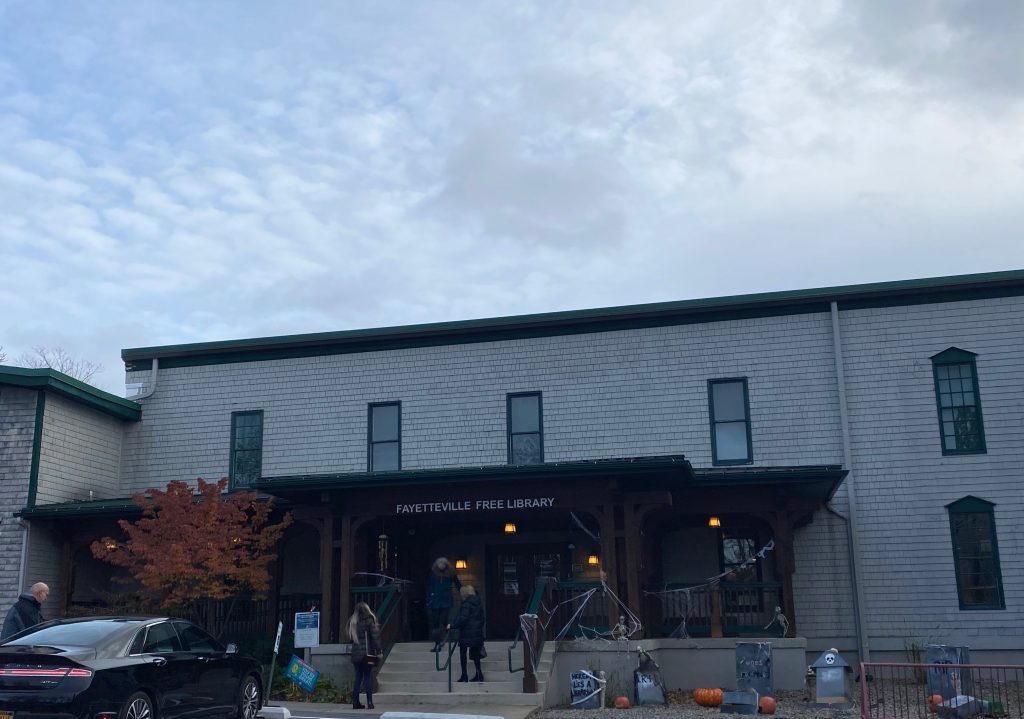 Outside of the Fayetteville Library, voters leave after filling out their ballots. (c) 2020 Gianna Valente

Manlius, N.Y. (NCC News)- The Fayetteville Public Library transformed into a polling station today, and for a brief moment, it became a dance party, too.

A grey Nissan Corolla slowly rolled into the library parking lot at around 3:30 p.m., blasting the song “FDT” by the rapper YG. Some awkward glances were exchanged between the driver of the Corolla and voters on their way to cast their ballots.

One woman broke the ice. With her grey hair peeking out from underneath a knit hat that had a matching mask, she marched over to the grey car and began to dance. The diver got out of his car and danced with her. The woman, who chose not to share her name, said the music and chance to meet someone new led to her spontaneous dance.

“People that I talk to, work with, neighbors, we are in agreement: we are one family,” she said. “We decided to vote for our friends that the President is fighting against. So when I meet someone who is voting to help my friends, I want them to know how much that means to me, that they are fighting for my friends.”

Despite the confused and sometimes grimacing looks the pair received from passersby, they played the song again and spun in circles around the parking lot.

“This is my, I think maybe my fifteenth, or fourteenth, something like that now, time voting in a presidential election,” the woman said. “In all of these years, I’ve never been so proud to tell people who I’m voting for. Dancing with that boy is how I decided to show them today.”

The two exchanged a socially distant goodbye, then turned back to their vehicles, with smiles visible despite their masks . The woman turned around one more time and thanked the young man for his vote.

“Have you seen the people walking in and out of here? I haven’t seen one without grey hair on their head,” the woman said. “Seeing a person as young as that boy, coming here in-person to vote for anyone that he wanted to, that’s the most important thing. People like him are the ones that are going to be affected for the longest time, so they should be that care most.”