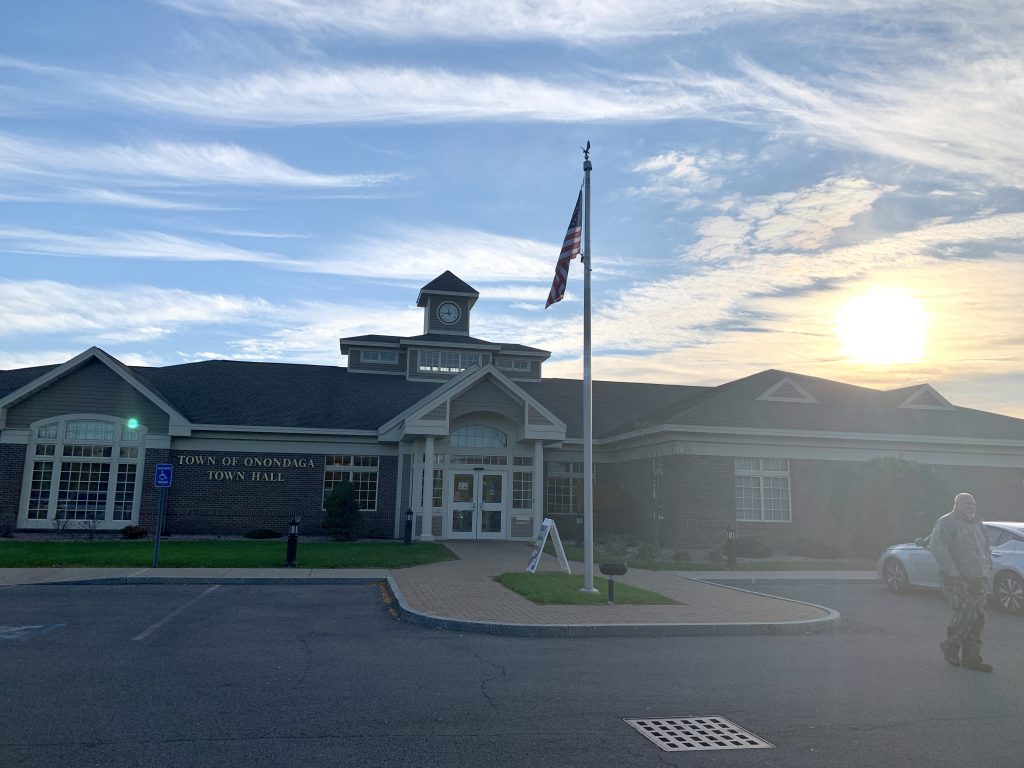 At the Town of Onondaga Town Hall, voters trickled in to cast their ballots mid-morning on Election Day. (c) 2021 Shivani Reddy

ONONDAGA, N.Y. (DiA) – Onondaga residents turned out to vote at the Town of Onondaga Town Hall this morning for their pick for state Supreme Court justice and county legislator.

Those were only two offices in contention on the ballot, while all other positions such as supervisor, town justice and town councilor ran unopposed.

Despite the relatively low-profile nature of this election, town residents like Will Heater were passionate to cast their vote.

“It’s really the only right you have,” Heater said. The 69-year-old retired postal worker has voted every year since he turned 21 and encourages others to do the same. “It’s your voice. That’s the way I look at it. You just got to vote.”

Heater said he was excited to vote in support of Democrat Anthony Brindisi for state Supreme Court justice, and that he was disappointed Brindisi lost his House seat in New York’s 22nd Congressional District in 2020.

“That’s the way it goes sometimes,” Heater said, “so let him be a judge and do some good work that way.”

Brindisi also served in the state assembly and has accumulated experience as a lawyer in Utica.

Marshall, like Heater, has also voted since she turned 21, before the 26th Amendment lowered the voting age to 18. She still remembers her first time voting, she said, calling it a “new and interesting experience.” She had never gone to the ballots as a child with her parents when they cast their votes, so she said she did not know what to expect but was excited for the opportunity to exercise her civic duty.

Marshall said she voted for Fogel because she was drawn to her background. Fogel has limited electoral experience, but is highly familiar with the courtroom, having been a trial lawyer for decades. “I saw some of her ads on TV and just liked the way she expressed herself,” Marshall added.

If either Fogel or Brindisi wins, they will become one of the youngest state Supreme Court justices to assume office, which Marshall said was “absolutely amazing.”

Younger voters also arrived at the town hall over the course of the morning to cast their vote. One such individual was Ellen Terrien, a master’s student studying English education at Le Moyne College.

Terrien said she turned out to vote because she was most concerned with the county legislative race. She said she has been working on Ryan Suser’s campaign for county legislator, and said she was “really excited” to vote for him.

“I think that the way the county executive and the legislature do things is not transparent, not fair and not the way it’s meant to be in a functioning democracy. So, I would love to see a part or all of those legislative seats flipped,” she said.

Terrien is no stranger to electoral processes. She said she has been working in politics and campaigns since she was a little kid. When she was five years old, her father, who was also a campaign worker, would take her with him when he was working on getting petitions signed.

“At some point, he realized that people were just friendlier when he had a five-year-old with him,” Terrien joked. She said she feels in good spirits about the campaign and the polls so far. “Everybody is really supportive and positive about getting people active and it’s been a great experience,” she said,

Marshall said she wants more younger people like Terrien to come out and vote. “I think it’s really important to vote. If you complain about what’s going in the world and you don’t vote, then you haven’t done your bit to fix it.”