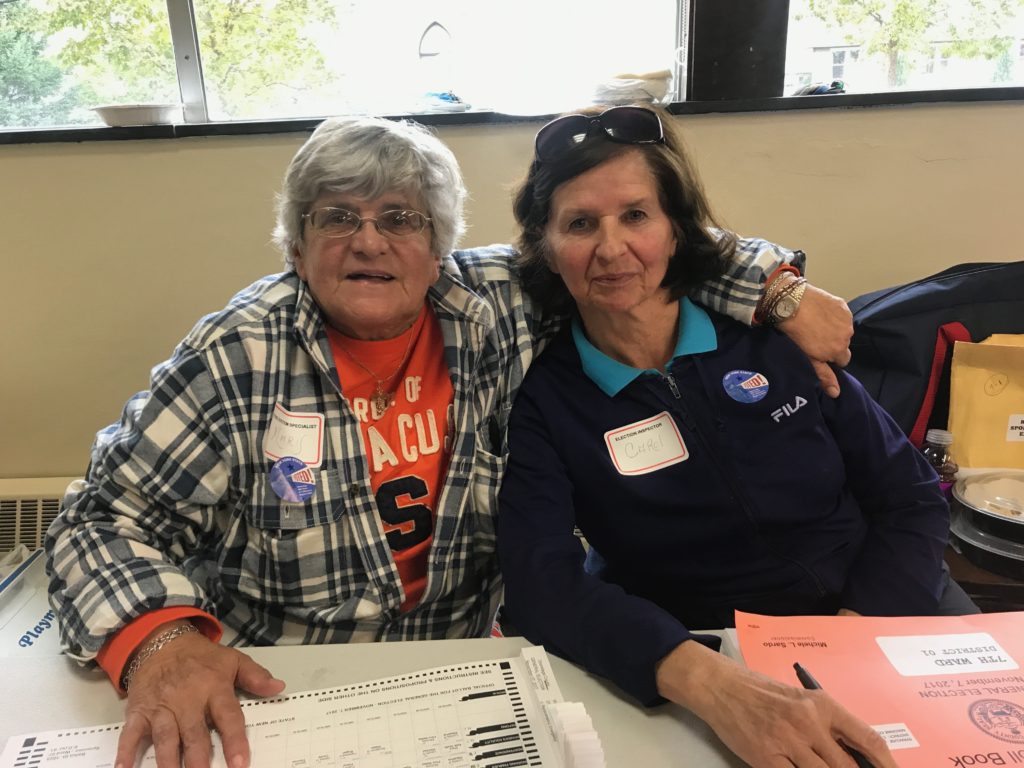 Mary Corso (left) and Carol Lanning (right) are close friends who have worked the polls in Syracuse for more than 20 years. (c) 2017 Gabriela Julia

SYRACUSE, N.Y. (Democracy in Action) — Mary Corso has worked as a voting system specialist in Syracuse for more than 25 years. She says every year is her last, but finds herself passing out ballots and stickers when the next election rolls around.

Corso, 72, said she would feel guilty if she stopped working the polls. She loves bringing in food and making people laugh as they walk in.

This year, she will sit at Hazard Branch Library on West Genesee Street for 17 hours, with her longtime friend Carol Lanning. Lanning and Corso have worked the polls together for more than two decades. They bicker back forth throughout the day, and Lanning sometimes scolds Corso for talking too much and not handing out ballots fast enough.

“We might be best friends now but by the end of the night we’ll be enemies,” Corso said. “She’ll be bald and I’ll be holding her hair in my hands.”

The two handed out lollipops to children and laughed with each other whenever voters submitted spoiled ballots.

“You can’t blame them,” Corso said. “Us older people are used to pulling the levers behind the curtain, not this computer and new machine stuff. Hell, I don’t even own a computer.”

Corso said voting gets more complicated every year, with new ballots, new machines and changes to the system for counting votes. She sometimes thinks about her aunt, who worked the polls until she was 90, and remembers how simple voting was then.

“I don’t know much longer I’ll be doing this,” Corso said. “I wake up every morning, put one leg out in front of the other and pray I get through another day. But you never know. Check back here in a year, I might still be here.”